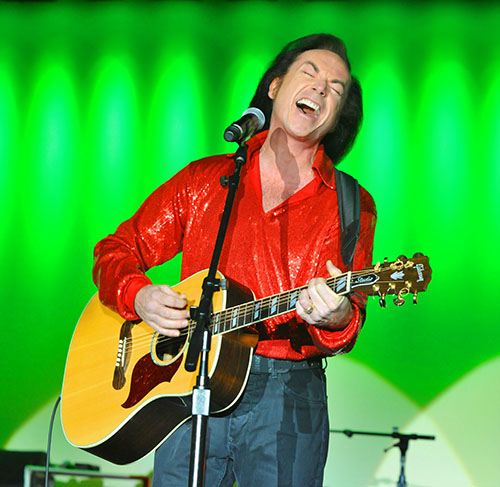 A legend in the tribute community, Bobby Bruce's Nearly Neil journey began in 1994. An actor and singer from Vancouver, Bruce was a new transplant into the Toronto entertainment scene when he was convinced by an Elvis impersonator to join a local multi-tribute show. Within a year Bruce was being scouted by Las Vegas' Legends in Concert. He joined them for a 10-month engagement in the U.S., with appearances stretching from Nevada to Branson to Atlantic City.

International engagements came calling, Bruce's first national tour of Australia with another Legends-style show saw 60 shows in 10 weeks across the continent, earning him his moniker. Directly from Australia, the tour went on to Malaysia where Bruce had the honour of performing for the King and Queen. The Australasian connection continues today with dozens of tours visiting Borneo, Singapore, as well as elite venues across Malaysia, national tours of New Zealand, and annual Australian tours that have taken him to every state and territory.

Using his international touring as a launch pad, Bruce broke away from the "Legends" type shows and formed Nearly Neil and the Solitary Band in Vancouver in 1997, quickly becoming a staple in the Canadian market. The Solitary Band has embarked on national tours of the U.S. and Canada, repeatedly toured the Cayman Islands, Holland, and Belgium, performed at exclusive private events for a handful of people, and entertained 20,000 guests at outdoor public concerts.

Over 25 years into his Nearly Neil journey, Bruce now lives on Gambier Island in Howe Sound with his wife. A few years ago, they found themselves in Italy for a private performance that gained them the opportunity to meet Andrea Bocelli.

The electronic translation service on the Bridge Festival website is hosted by Google Translate, a free service that offers translation in over 50 languages. The quality of the translation may vary in some of the languages offered by Google. The goal of the basic translation is to capture the general intention of the original English material.

If you have a question about the material you read on our website, please contact Maria Blake, Marketing Coordinator, at 604-913-2778.